Art and spirituality in the heart of Gipuzkoa

The mountains of the Urola Valley is the idyllic setting for this Sanctuary built around the house where Ignacio de Loiola was born in 1491. The majesty of the dome towers above the natural landscape, making the building a must-see in the Gipuzkoa hinter-land.

Even as we approach its well-tended gardens to the front, we are overcome with the spirituality of the location. The sculpture of Ignacio de Loiola stands at the beginning of the path up to the entrance of the basilica that bears his name. This was built around the Loiola family home, and two events transformed it into the subject of a continuous pilgrimage: the birth of Íñigo López de Loiola in 1491, and his conversion to Catholicism in 1521. 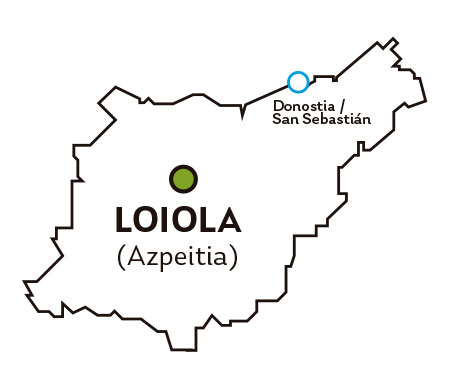 The Basilica, designed by Italian architect Carlo María Fontana, is the central volume of the building. Outside, an impressive dome 65 metres high rises up to give balance to the 150 metres of façade. Work began on the building in 1689, but it was not inau-gurated until 31 July 1738, the fiesta of San Ignacio. The entire project, which involved up to 600 stonemasons, was built using large blocks of marble taken from Mount Izar-raitz nearby.

Another of the main features of the building is its spectacular dome. No less than 20 metres in diameter and rising to a height of 50 metres, it represents the virtues of faith, hope, religion, charity, prudence, justice, strength and temperance. A little fur-ther on, the marble altars feature a convincing statue of San Ignacio de Loiola execut-ed in silver. You may also get the chance to hear the organ with its three keyboards and more than two thousand pipes if you happen in on a liturgical event or a concert.

Finally, you can visit the house where San Ignacio was born, and find out about the daily round of his family, along with some of its historical episodes, to round off an experience brimming over with spirituality in such a special, inviting natural environ-ment as the Sanctuary itself.