The Arantzazu Sanctuary and the Aizkorri-Aratz Nature Park, an exceptional natural environment

A mysterious apparition to shepherd Rodrigo de Balzategi is the origin of the legend that led to the construction of this jewel of contemporary art. The hands of great artists such as Basterretxea, Chillida and Oteiza only add to the grandiosity of this Sanctuary, surrounded by a precious natural resource known as Aizkorri.

Legend has it that the Virgin appeared to Rodrigo de Balzategi on a thorn bush. Astonished, he asked her in Basque: "Arantzan zu?" (You in the thorns?). She then told him that a hermitage had to be built there, called Arantzazu, and prophesied that over time it would be a famous location. Subsequently for centuries the place where it was built was a destination for Franciscan pilgrims, not to mention an emblem of art and culture. 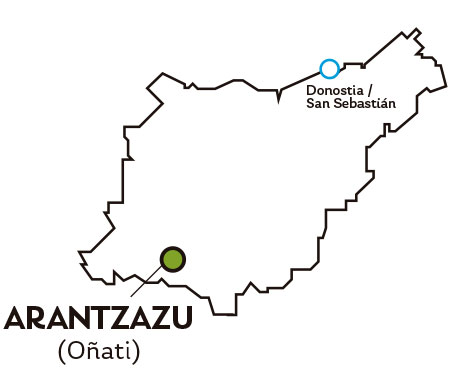 The Arantzazu Sanctuary, as we know it nowadays, is the result of no fewer than three reconstructions after three fires, the last in 1834.

This impressive structure, overhanging ravines and built on rocky outcrops in the natural wilds of Oñati, underwent a constant evolution until refurbishment work and extensions were cast aside in favour of the construction of a new basilica. It had to be a solemn construction, but it also had to be expressed in a modern language, with particular emphasis on its artistic components.

The winning design submitted by Francisco Javier Sáenz de Oiza and Luis Laorga produced contributions by some of Gipuzkoa’s most universal artists. Despite certain stumbling blocks in the process, Jorge Oteiza created the apostles in the frieze at the entrance to the Sanctuary; Eduardo Chillida also applied his innovative style to fashion the entrance doors; Javier Álvarez de Eulate created the stained-glass windows to flood the building with light; and Nestor Basterretxea took charge of the pictorial art in the crypt. What vast stores of artistic value are hidden away in this Sanctuary nestling in the safety of the Deba Valley, a witness to developments in the latest artistry down through the centuries.

And near this Valley, only a few kilometres away, visitors have a choice among countless mountain paths, among which the path leading to the Aizkorri-Aratz Nature Park. Here we find one of Euskadi’s highest peaks, Mount Aizkorri (1,528 m), from where we can pick out all the other mountains in the area. The trajectories of the Oria, Urola and Deba Rivers down through the years have left their mark in the San Adrián pass, a tunnel set into the rock concealing a hermitage.

Close by, the experience of contact with history and nature around Oñati is rounded off with a visit to the Arrikrutz caves. We find this underground baroque cathedral at the centre of the valley, built by nature, composed of over a dozen kilometres of interconnected galleries. The magic of Gipuzkoa’s hinterland reaches its maximum splendour in this visit to the Arantzazu Sanctuary and the surrounding area. A comprehensive, unforgettable experience.