Every June 30th on San Marcial Day, gunpowder smell fills Irun streets. This is the day in which several companies march through the city with rifles. The celebration commemorates the day when Irun troops defeated French and German troops on June 30th, 1522.

The parade recalls that night. The sound of fifes and drums combine with the thunder of thousands of rifles firing at the same time following the general's order. Several companies make up the "alarde" military review. Each of them wears special uniforms -white shirt, trousers, red beret and belt-, which varies depending on the group the member belongs to: infantry, soldierts, drummers, artillery, calvary, axemen, and so on.

They march towards San Marcial Mountain, where a huge religious celebration will be taking place to honour the Saint. Two different parades have been held from over ten years on. The first "alarde", known as the "traditional" one, takes place first. Around 8,000 people make it up, where women are allowed to participate just as "cantineras". The following is a "mixed alarde", where around 2,000 men and women take part. Women participate as "cantineras", gunwomen, make up troops playing "txilibito" (whistle) and the drum roll. 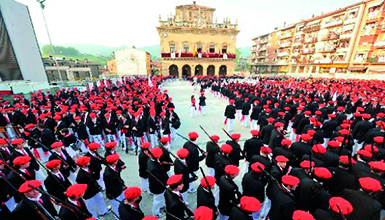